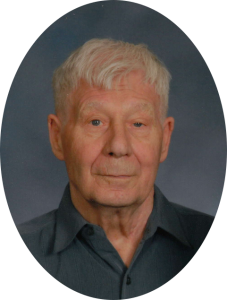 Dwayne Johansen was born October 18, 1931 to Walter and Mae (Jansen) Johansen in Woonsocket, SD. He attended school there until he quit to join the Army and headed to Korea. When he returned, he married Shirley Sorenson in Mitchell SD. The couple had four children. Dwayne worked for Mitchell concrete. He eventually started at Sioux Steel in Sioux Falls and he relocated there. Dwayne was then working for John Morrell in the Sheep Kill. He retired after 33 years. He married Carolyn Ness on September 11, 1994 in Sioux Falls.

Dwayne had a huge hobby for model airplanes, trains, and cars. His collection of these covers every room at his home. He loved to build them from the ground up, paint them, and then fly his planes. His family has many memories of these expeditions. Along with modeling, Dwayne loved to draw and even went to art school for a short time. Vegetable gardening was another pastime for Dwayne and Carolyn with his 60 x 140 ft. patch. Dwayne could always be found on one of his scooters or cycles. His favorite was his 1947 Indian, Chief. Dwayne will long be remembered for his musical talents as he and Carolyn played the nursing home circuit around Sioux Falls area in the Bert Jones Band for over 15 years. His talents on the mandolin, banjo and harmonica brought smiles to many folks as they reminisced of the old county sounds the group played. Dwayne will be missed by his many friends in the Corson and Brandon area and the Brandon VFW.

Dwayne was preceded in death by his parents and one brother, Ronald.