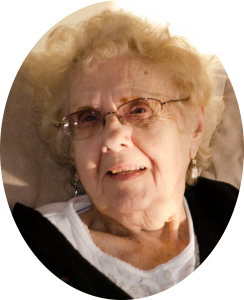 Visitation will be 1-3pm, Sunday, July 5, 2015, at Heartland Funeral Home, Brandon. Interment will be 10:30am, Monday, July 6, at the Black Hills National Cemetery.

Mabel Ann (Wiese) “Sandy” was born April 14, 1926, in Luverne, MN, to Richard and Anna (Moeller) Wiese. She grew up on a farm in Magnolia and then Woodstock, MN, as the youngest of sixteen children. After school she moved to Sioux Falls and worked there. Sandy married Robert Friman on February 29, 1948, in the Methodist Church, Sioux Falls. In June, 1949, the couple moved to Huron, where Bob was employed as a field representative for Standard Oil. In December 1950, they moved to Pierre where they became distributors of Standard Oil Products until they retired in 2000.

Bob and Sandy were blessed with two daughters Susan, in 1955 and Brenda in 1959. This made Sandy and Bob very happy. These two girls were the high light of their lives. Along with supporting Bob in his business, Sandy was very involved in raising her children, managing the household, spending time with her many friends and participating in Pierre area and church activities.

Sandy and Bob wintered in Arizona for 25 years, enjoying time golfing and socializing with friends.

A memorial has been established in Sandy’s honor.