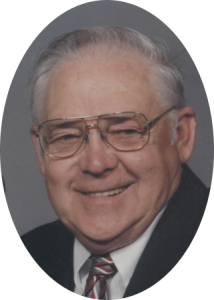 Celebration of Bob’s life will begin at 12:00 Noon, Monday, April 27, 2015, at the Community Reformed Church of Sioux Falls. Visitation will begin one hour prior. Full Military Rites will follow.

Robert Joseph Peterka was born October 24, 1932, in Utica, SD, to Sylvin and Ella (Bierle) Peterka. He was raised and educated in the Yankton area. Upon graduation from Yankton High School, Bob farmed a couple of years before he joined the Army, serving about two years. When he did return, Bob had two new loves. He loved to work on cars. He attended and graduated as an approved body mechanic from the Chevy Motor Division of GMC. His other love was declared on June 26, 1958, when Robert married his wife of over 50 years, Annie Gelling. The couple resided in Mitchell until 1965, when they moved to Sioux Falls. Bob first worked for a couple of body shops, Jay-Shon’s, as a paint and body man and Crawford & Co., as an auto damage appraiser before starting his own company, Peterka’s Damage Appraisers, which he operated until his retirement.

Bob and Ann expanded their home with the adoption of their two children; Darla in 1964 and Daren in 1967. Bob was known by his family as a loving and devoted husband, father, grandfather, and great-grandfather. He was very proud of and loved spending time with his kids, attending his granddaughter’s activities, and watching his great-grandchildren play. Bob demonstrated his love and devotion to Ann even more, when her health required constant attention, by tending to her every need so she would not have to go to a nursing home until the very end. Ann passed away in 2008.

Bob was a long time member of Community Reformed Church of Sioux Falls and participated in many activities within the church. He also believed in giving back to the community through blood donations, volunteering for Meals on Wheels, and being a “Bell Ringer” for the Salvation Army at Kmart East for several years.

Robert was preceded by his wife, Ann; his parents, Sylvin and Ella (Bierle) Peterka; and son-in-law, Todd Moulton.